Today I want to share some of my favourite engagement shoot locations in Manchester (and Cheshire!) with you. Over the years of being a Manchester wedding photographer, I’ve found that these locations work really well for pre-wedding shoots.

I’ve included a mix of locations in my list; from Manchester city centre to the Cheshire countryside. All locations are easy to find, have free entry and at least three of the five are accessible by public transport. There’s an atmosphere for every shoot too; from urban cool to outdoorsy!

I’ve even included my recommendations for post-shoot refreshments! I hope you enjoy my tops 5 best engagement shoot locations Manchester.

The Castlefield area of Manchester is one of my go-to urban locations for engagement shoots. Once home to the Roman fort that gives the area its name, Castlefield is now a waterside home to bars, restaurants and the wedding venue The Castlefield Rooms.

I’m a huge fan of the red brickwork and Victorian architectural features in this location. The high railway arches are truly impressive and give a real sense of space to the area. The two bridges are great focal points for engagement photographs too.

Another brilliant bonus to this location is that it’s mostly undercover, perfect for any sudden showers! After your shoot, enjoy a cold pint of Manchester Pale Ale at The Wharf whilst watching the cancel boats go by. 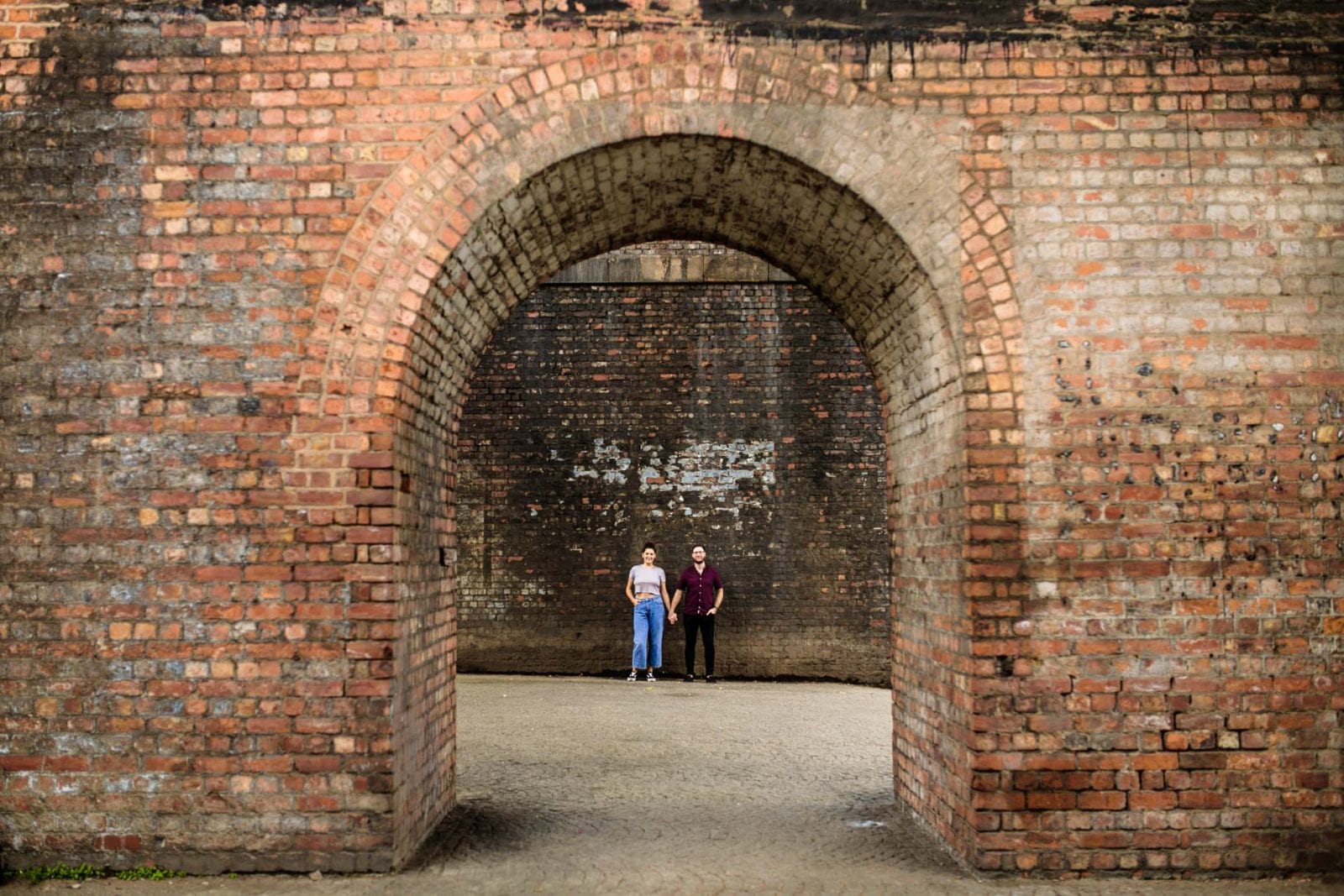 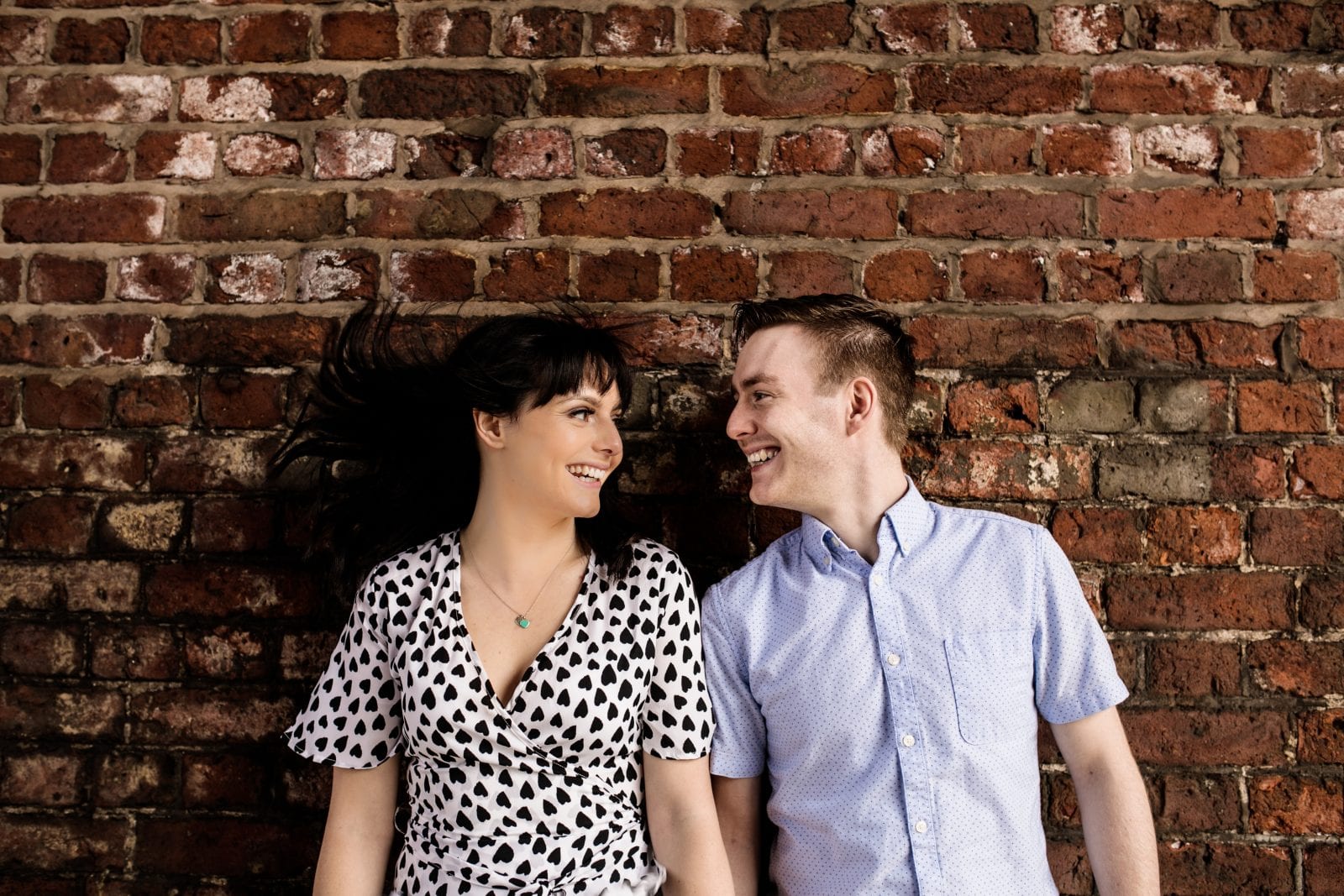 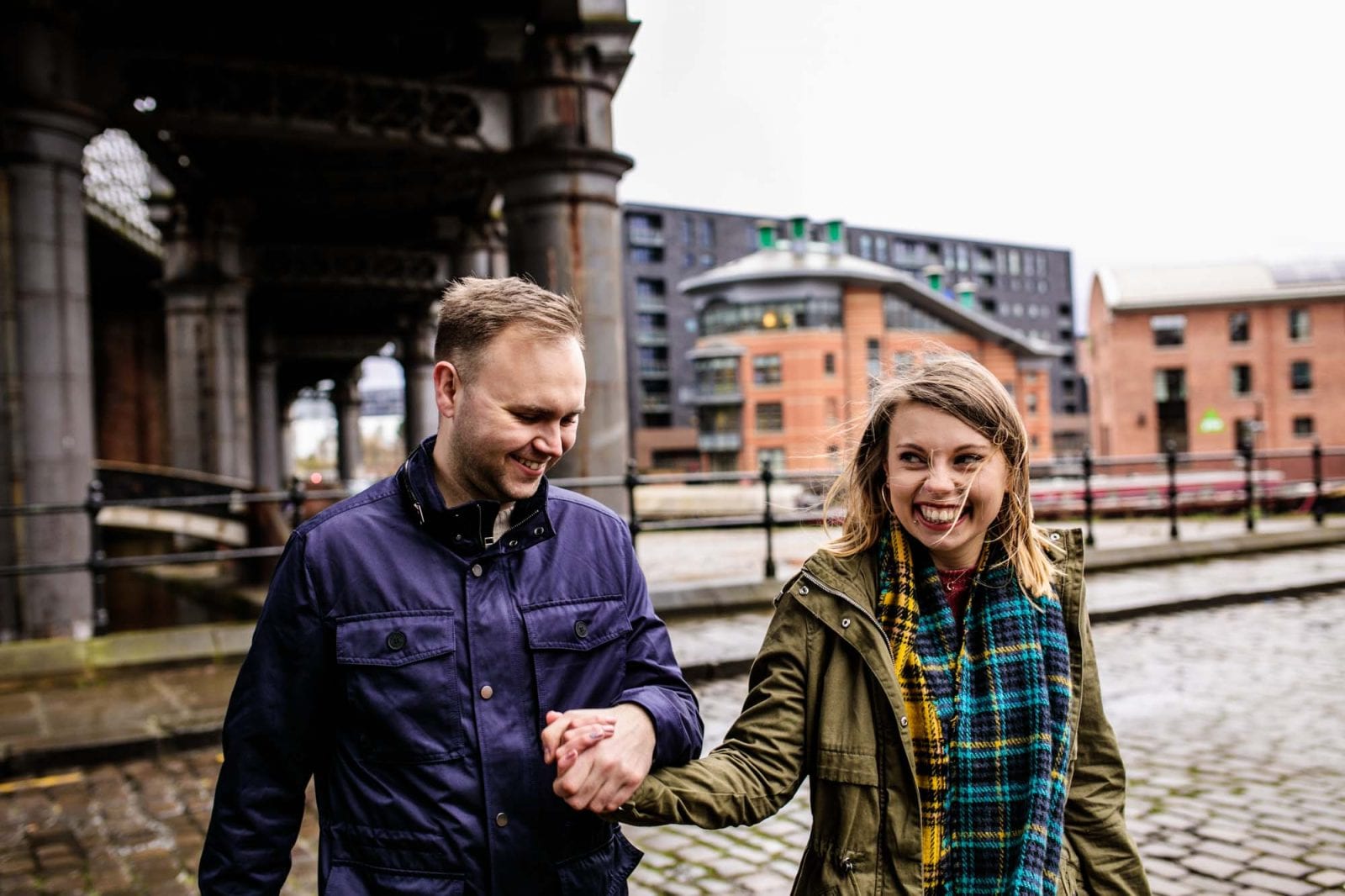 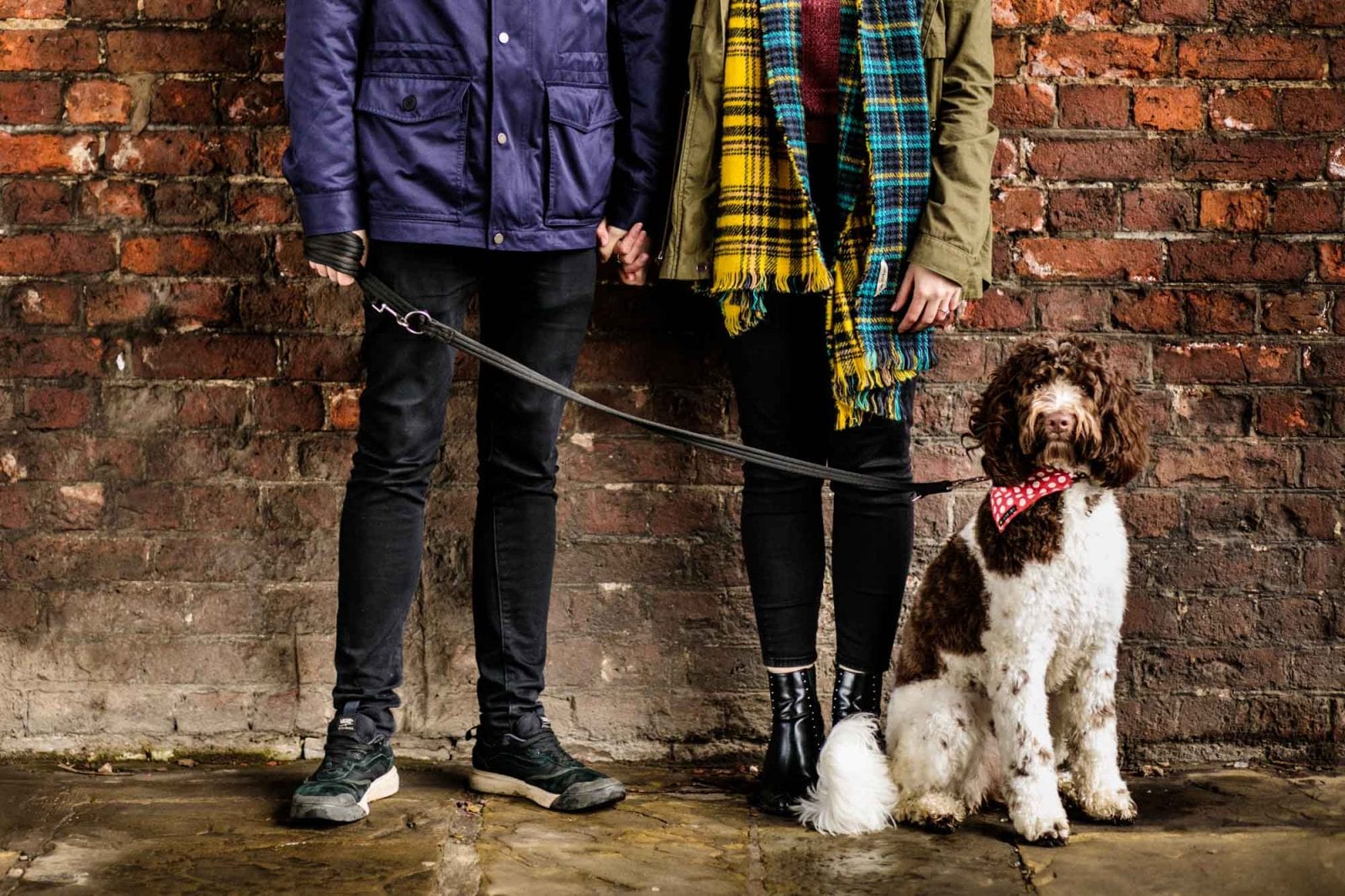 Located in Didsbury in South Manchester, Fletcher Moss is a lovely place for a tranquil walk away from the city. It also be happens to be close to Didsbury House Hotel, so a trip to Fletcher Moss is usually on the cards if I’m shooting a wedding there.

Fletcher Moss park has a rock garden, tennis courts and a nature trail that joins onto the river Mersey. So you can have lots of variety in your engagement shoot at Fletcher Moss Gardens. The location is sprawling enough that you can get away from other people and have peace whilst you have your pictures taken.

One of the things I love about Fletcher Moss is that it’s different all year round. Spring brings blossom, with the leafy trees turning to orange in autumn. One constant though is the avenue of evergreens that lines one of the paths beautifully – don’t you love a bit of symmetry in engagement pictures?!

For a post-shoot brew, take a walk up to Didsbury High Street for a coffee at Expo Lounge. 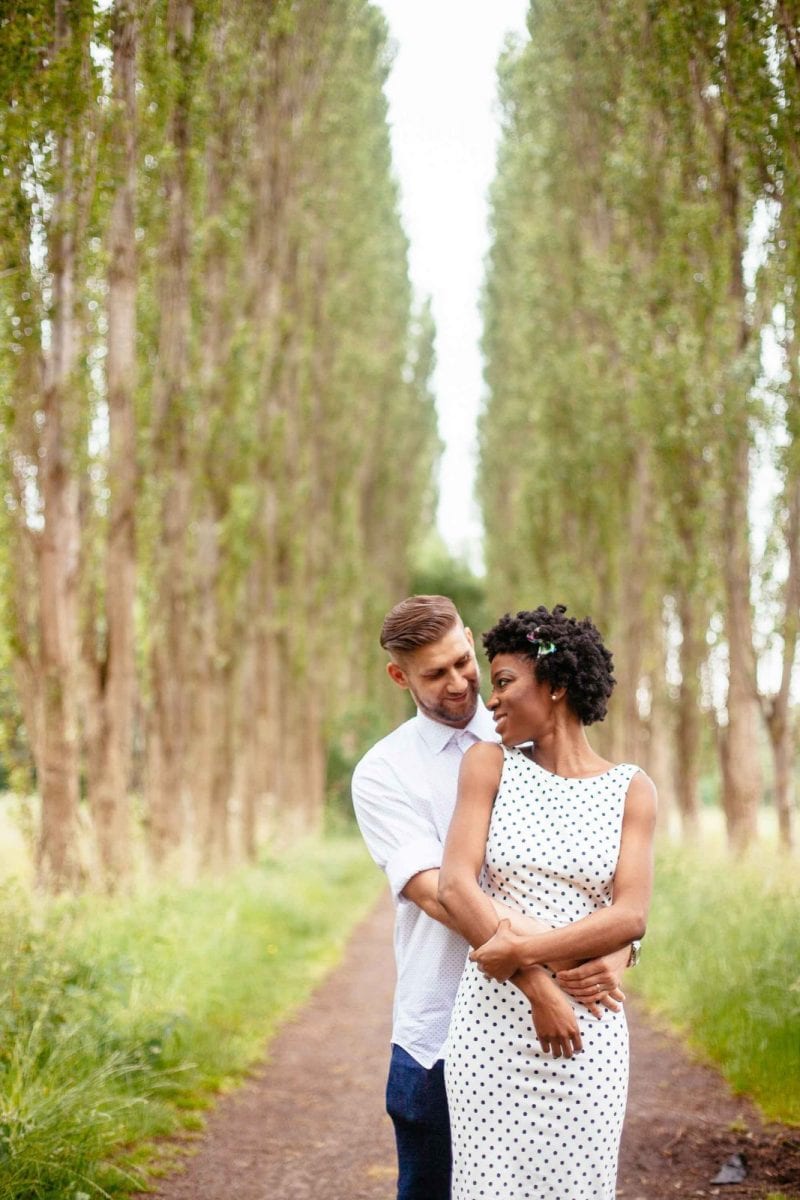 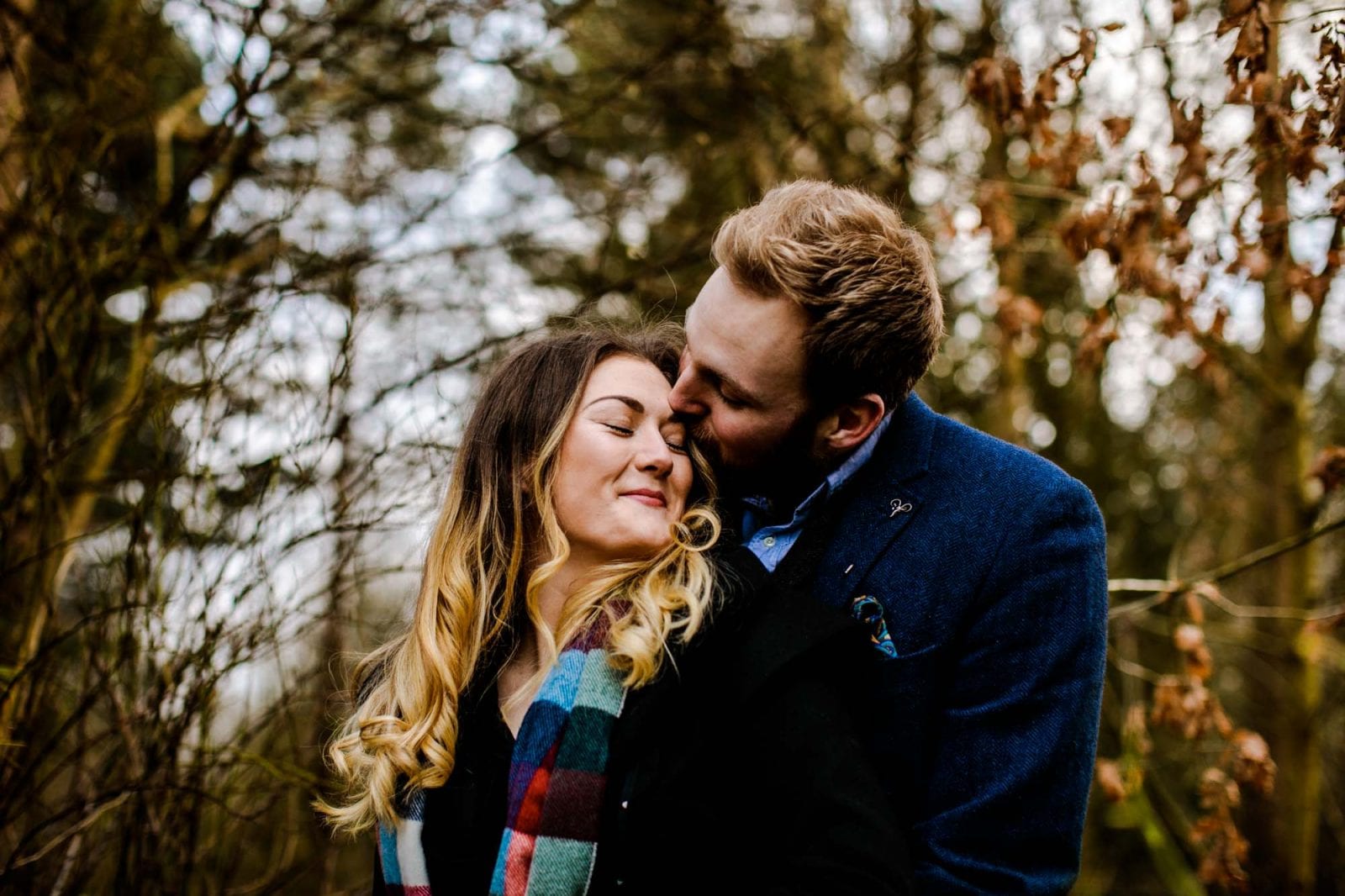 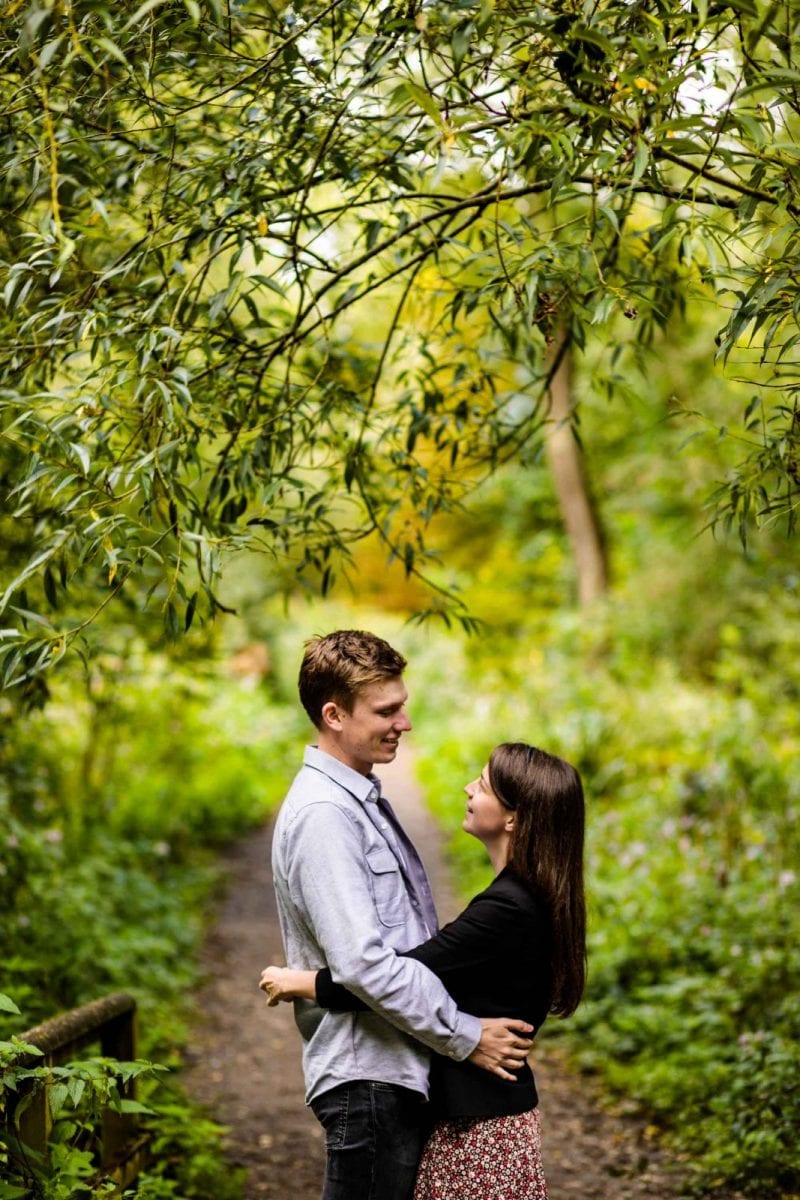 Dunham Massey is a National Trust stately home and park located in Altrincham, Cheshire. Like Fletcher Moss, it’s a big space with lots of places to avoid the crowds so you can be comfortable during your shoot.

The park is leafy and green, making it a great place to shoot during the summer months. It looks great in winter too and in fact one of my favourite pre-wedding shoots ever is this Foggy Engagement Shoot Dunham Massey shot in January.

If open countryside is your thing, then Dunham Massey is a great choice for an engagement shoot. Don’t forget to look out for the deer! And have a hot chocolate in the cafe afterwards. 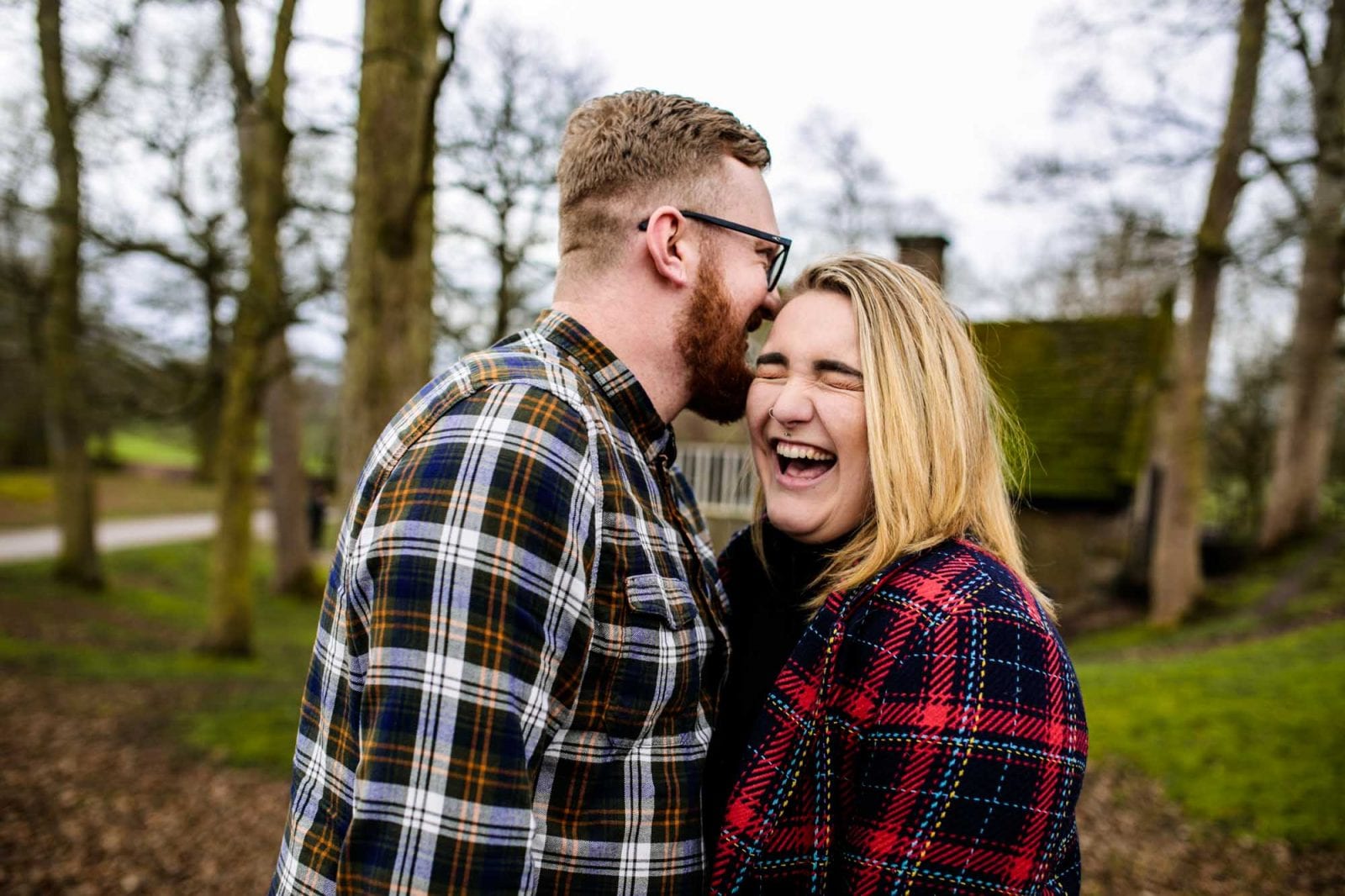 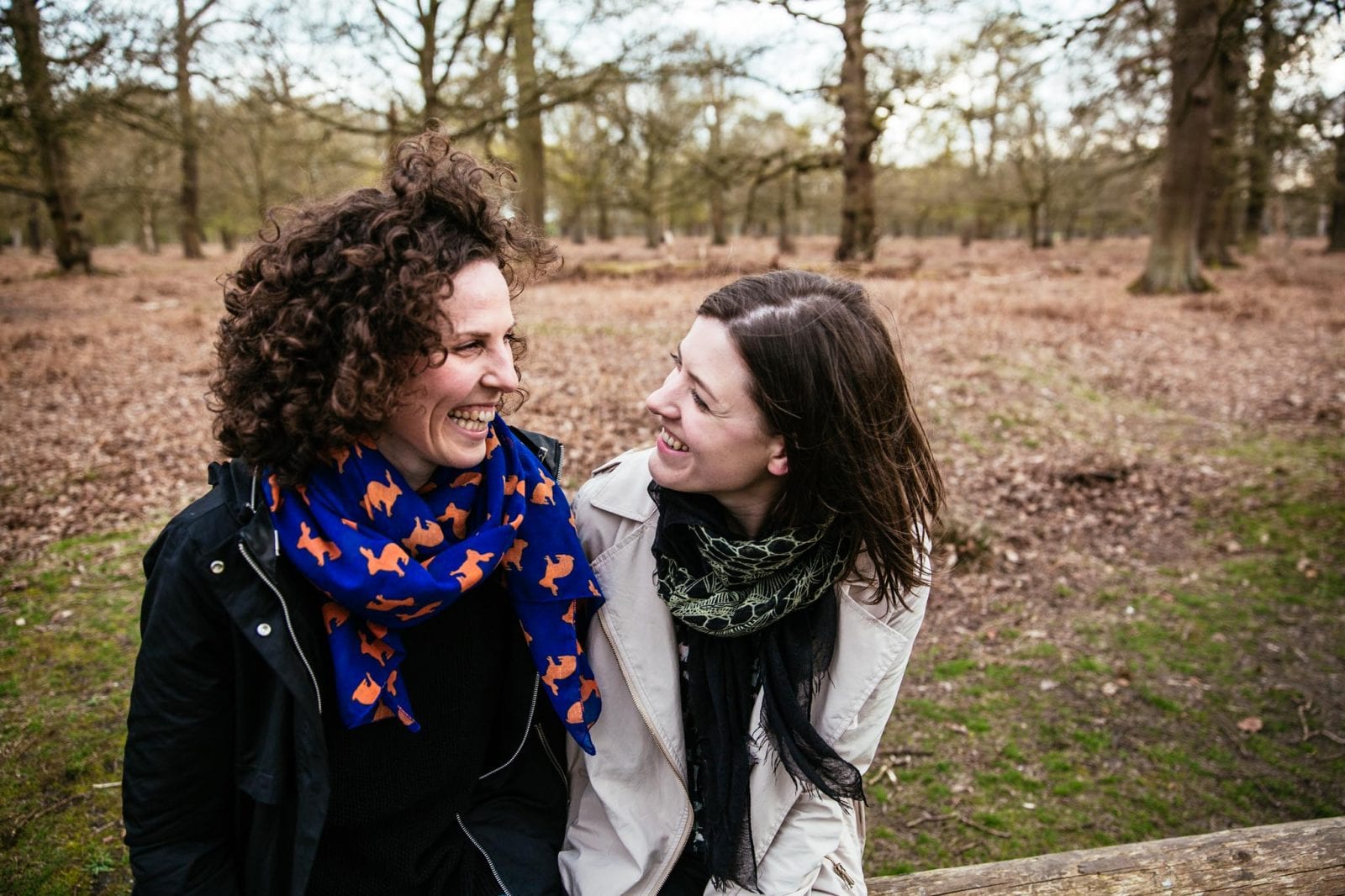 Similar to Dunham Massey, Tatton Park is another stately home and park located in Cheshire. The park area is vast, with open grassland, wooded areas and a lake that all make lovely locations for pre-wedding pictures.

Tatton Park backs onto Knutsford high street, which is very pretty in its own right. So I like to shoot a bit of both locations to get a good variety of engagement pictures in your shoot.

If you’re camera shy, Tatton Park might be the place for you. It’s by far the quietest of all the locations on the list, especially on weekdays.

For a post shoot drink, head to The Botanist for a G&T or cocktail.

See a full Engagement Shoot at Tatton Park at my blog. 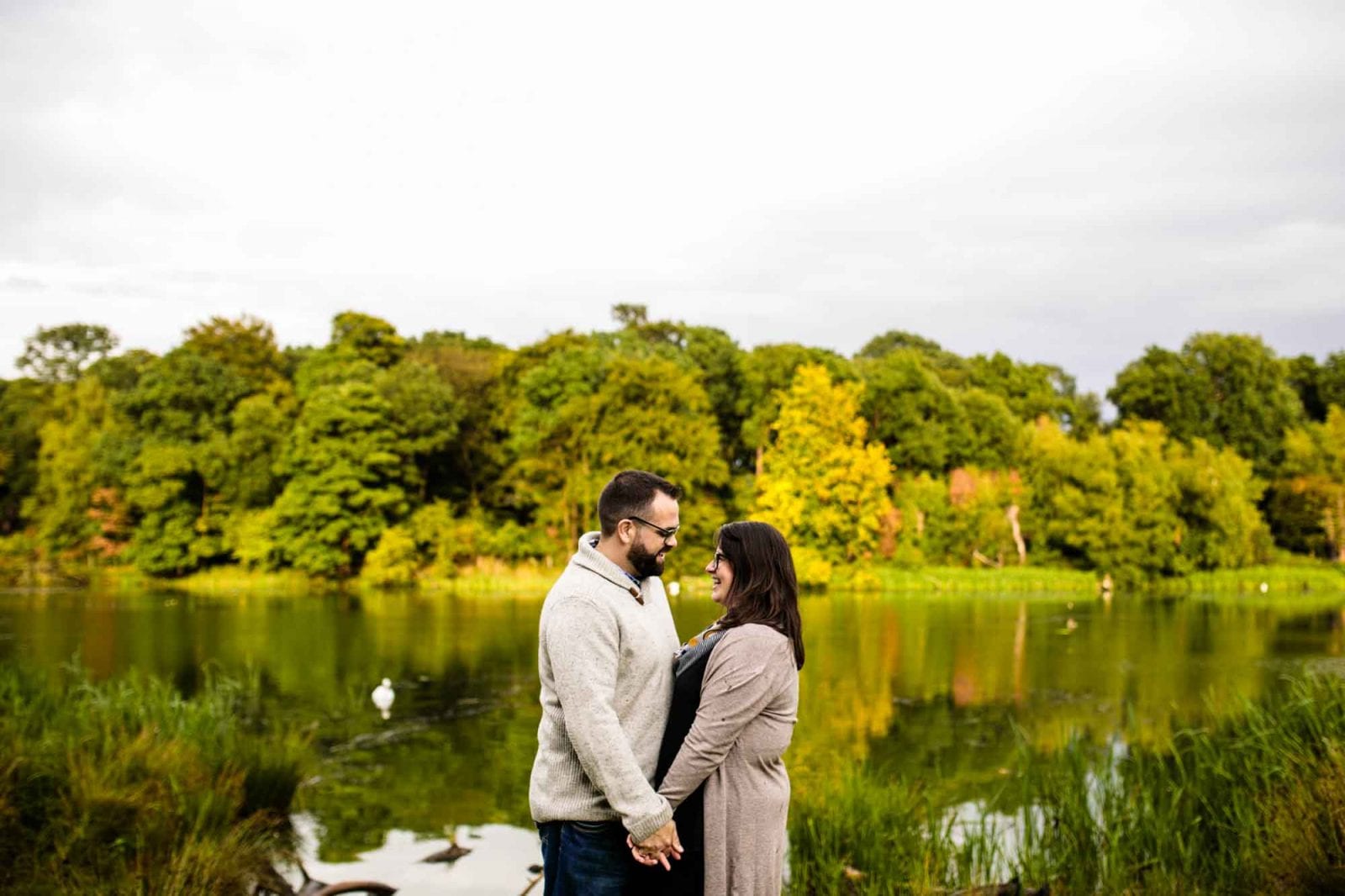 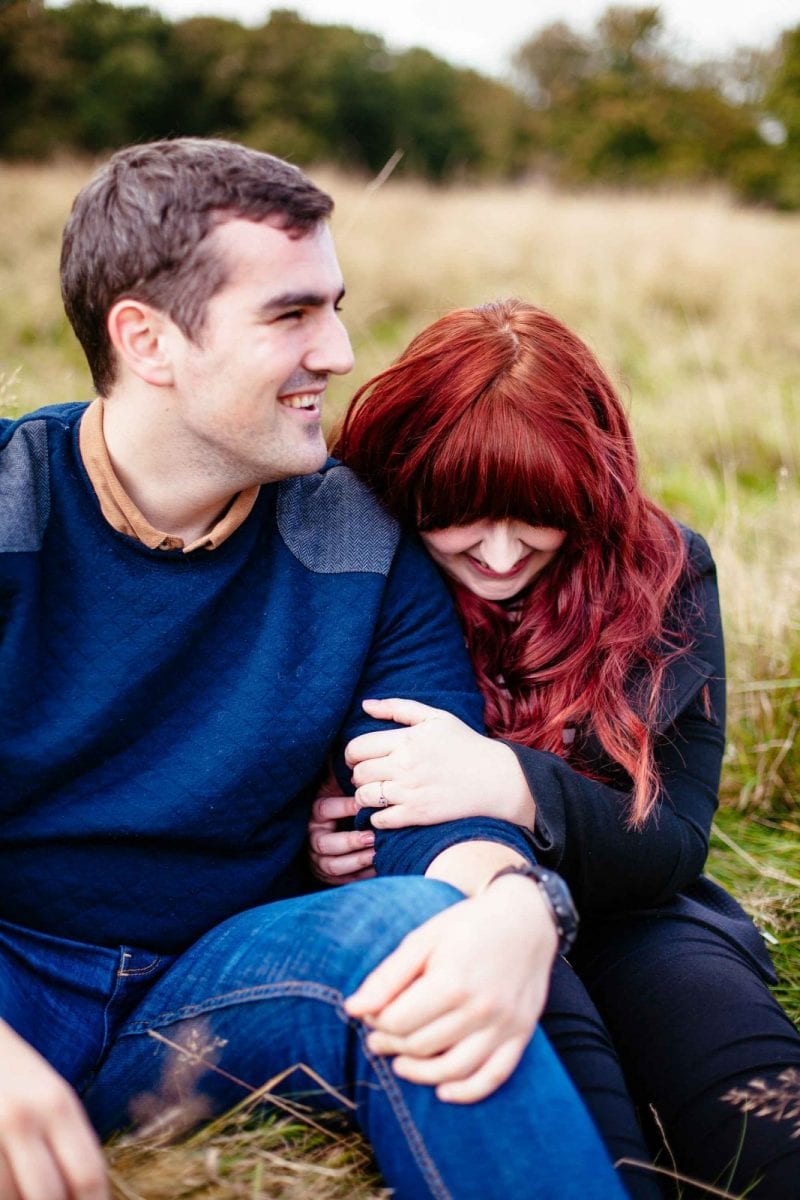 Manchester’s Northern Quarter is renown for its hipster atmosphere, so if you’re looking for an urban and cool feel to your engagement pictures, you can’t go wrong with this location.

I like shooting here as the Northern Quarter is a great place to find colourful street art that really makes engagement pictures pop. The graffiti changes week to week, so I like to start at Afflecks Palace and then take a wander through the streets, picking locations as we go.

Shooting in the Northern Quarter is much busier than many of these other locations. So be prepared to wait for traffic and for people to go by!

Afterwards sip a milkshake at Home Sweet Home or a tea and cake at Teacup Kitchen. 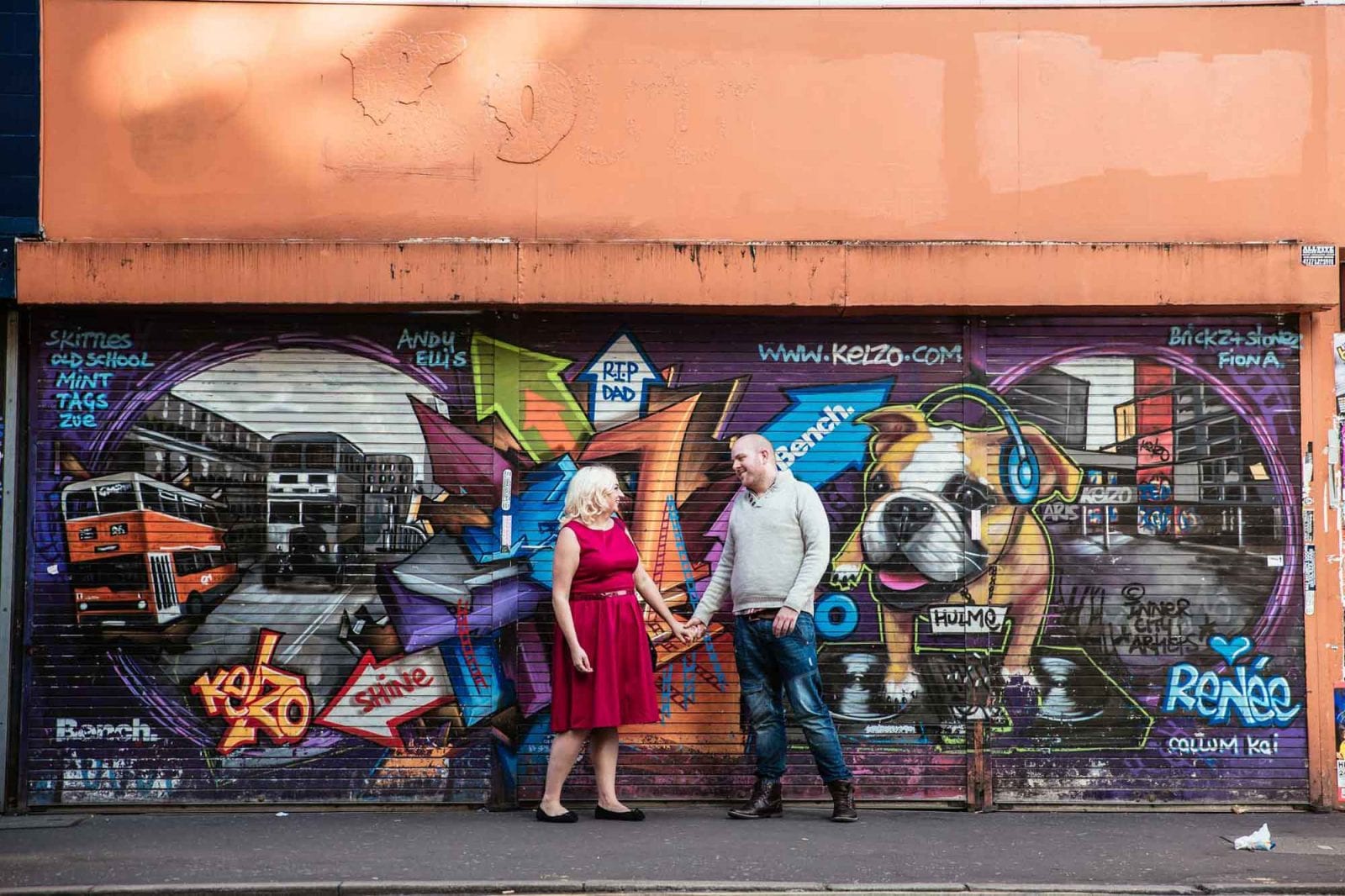 Cassandra Lane is a creative wedding photographer based in Sale in Cheshire. She offers colourful, natural and fun wedding photography. Cassandra travels all over Manchester, Cheshire and rest of the UK shooting weddings & family portraits.